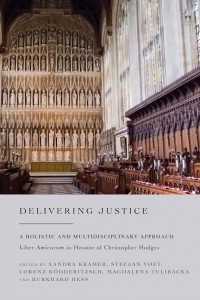 Xandra Kramer co-edited a the book Delivering Justice: A Holistic and Multidisciplinary Approach, Liber Amicorum in Honour of Christopher Hodges (Hart Publishing 2022), together with Stefaan Voet, Lorenz Kodderitzsch, Magdalena Tulibacka and Burkhard Hess. The book contains 23 chapters dedicated to the key topics Prof. Hodges has worked on, including collective redress, consumer dispute resolution, court reform and new technologies and ethical business regulation. The book was presented to Christopher Hodges OBE at the ADR Conference at Oxford University on 9-10 November 2022.

From December 2021 – June 2022, the team of the Vici project ‘Affordable Access to Justice’ at Erasmus School of Law organizes an online seminar series dedicated to Trends and Challenges in Costs and Funding of Civil Justice.

The second seminar was dedicated to Legal Mobilization: A European Perspective, and took place on 19 January 2022, 15-17 CET. This discussed recent scholarship on legal mobilization at the Pan-European level in the context of EU Migration Law, EU Data Protection Law, and European Human Rights Law.

Sanja Badanjak (University of Edinburgh)prestented on Constitutional review as an opportunity structure for legal mobilization in the EU. She addressed how constitutional complaints offer routes through which citizens’ mobilization in defence of their rights may be realized. In the EU, this can be used to voice opposition and change EU law via the preliminary reference procedure. However, this also requires further consideration of cross-country variation in citizens’ access to constitutional litigation.